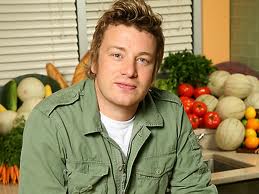 Chef Jamie Oliver is an engaging and entertaining chef. He earned this reputation on the television series The Naked Chef

broadcast by the BBC. His boyish good looks and charm won over audiences around Britain. And then he came to America.

Chef Jamie is on a mission. Changing the way kids eat in schools. In the television series “Jamie’s School Dinners” he uncovered the appalling quality of food served in the public school lunch rooms across Britain. With the help of petitions and activism, Chef Oliver helped to start the transformation of the way kids eat in school. And he’s brought that fight to America.

“Food Revolution” is a new series that focuses on the challenge of addressing the problems of obesity, heart disease and diabetes in the United States-where for the first time a generation of children are not expected to live as long as their parents. He invites viewers to take a stand and change the way we Americans eat.

Not an easy task when talking about a public school system that states french fries are an optional vegetable selection. And where milk that contains sugar is served. We are talking about changing the way a group of people eat who order fast food at drive-ins, take it to work and consume the meal in under five minutes. A population of folks who, when I talk to them, say that they really ought to eat more vegetables, and then shudder at the thought. A class of folks who feel that the food we can obtain is our right and privilege, even though that food (processed) is killing us (not yet proven).

Jamie Oliver is on to a good thing, and he can do it with your help. Sign the petition and get involved. If you care about the way your children eat in public schools, and the state of Food in the United States, help change the way we look at food, the way we buy our food, and what we eat. It’s what the Kitchen Shaman is all about. Fresh, great food, that not only tastes good, but makes you feel good too. 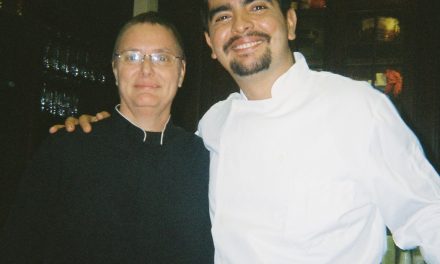 One minute with Chef Aaron Sanchez