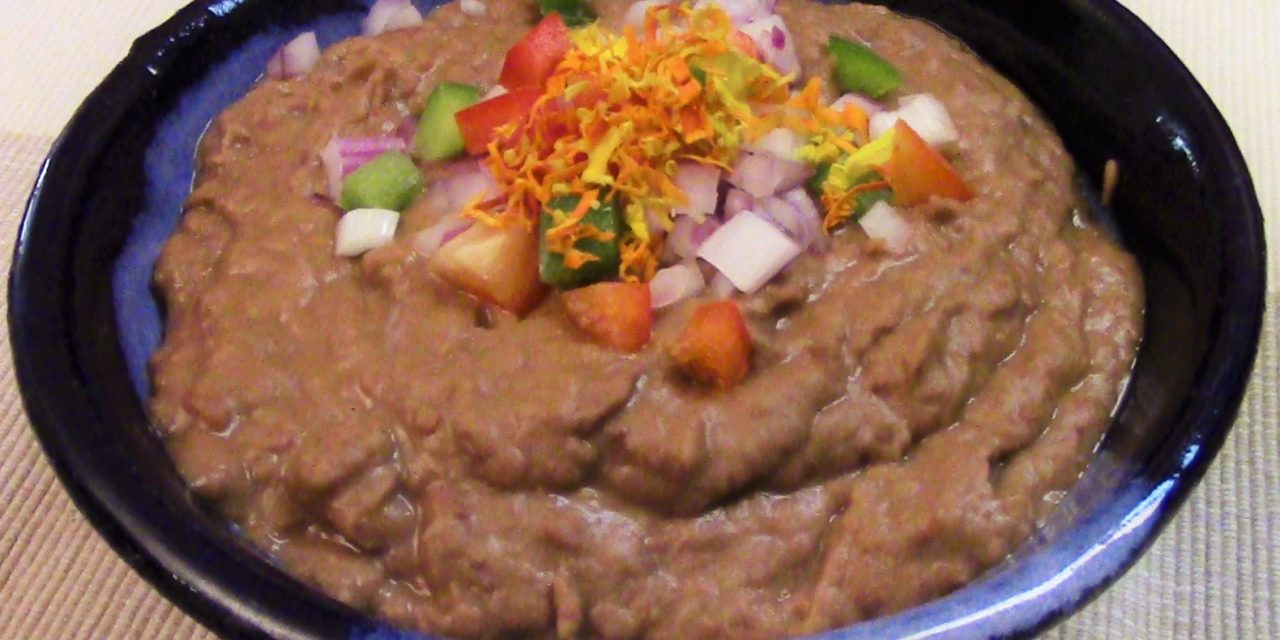 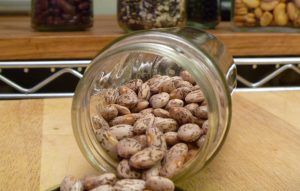 Pinto beans are native to the American Southwest and Mexico. They have been a staple in indigenous diets for centuries. They are seen on tables across homes and restaurants throughout the greater Southwest. In Moriarity, New Mexico, there is a yearly festival celebrating the harvest of this popular bean.

Traditionally Frijoles refritos, or refried beans, are cooked with lots of chilies, garlic, and onion. The beans are cooked to tenderness, then fried and mashed in lard. They are salted and consumed in large quantities. I’ve been eating them for as long as I can remember, usually out of the well-known can, Rosarita’s, with the trademarked logo of a happy Mexican girl holding up a plate of beans.

Born right here in my home state of Arizona, Rosarita’s Refried Beans began in the early 1940’s and was owned and operated by Pedro Guerrero. The company was sucked up in the early 1990’s by a big food production. The little company that could became just a shoot of ConAgra. Still, they boast that they use the same recipe from 70 years ago. Pedro’s grandmother’s recipe I’m sure. I finally learned how to cook frijoles refritos in my early 20’s, instead of eating them out of a can, because no deserving Southwestern cook is complete without this recipe under their belt, and I was an aspiring chef in Tucson, AZ, the heart of the Southwest.

While working in banquets, I discovered the joys of batch cooking refried beans for parties of 1,000 or more, as long as I was working in a kitchen that cooked from scratch. The process goes like this: buckets of whole pinto beans get soaked in 25 gallon cambros in walk-in coolers on big carts that can then be wheeled to their destination. These beans are poured into commercial tilt skillets along with lots of dried red chilies, onions, cumin powder, and garlic. Once they are cooked past tenderness, they are pureed with industrial strength immersion wands. These are the tools that weigh ten pounds and are the size of a small child.

Alternately, chefs had me “whip” the beans. The pinto beans are cooked in large, industrial pots on gas stove tops covered with aluminum foil. At least one cook has the responsibility of checking the water levels of the beans throughout the day, making sure they don’t go dry and burn (like bacon, beans get burned on a regular basis due to negligence). When the beans are done, they are dumped into industrial mixers the height of an average human and they get beaten to a pulp with the whisk attachment. The one advantage of mashing the beans with the whisk? You don’t have to keep a hold of that damn wand, the machine does the work. The disadvantage? It’s a two-step process not one.

Where does the lard, or fat, figure into this scheme? The lard gets spooned in while the beans are cooking. Frijoles aren’t really “fried.” It is a mistranslation. They are cooked by the methods described above and, in homes, are “refried” in fat in a skillet on the stove. The beans are mashed in with the fat which binds the beans together, giving them their classic cohesion.

At home I learned how to veganize this recipe. At first I used corn oil. It added a great flavor to the beans. Until I found out I was allergic to corn. I searched for a suitable alternative. The oil had to have enough fat content to bring the mashed concoction together. I discovered that sunflower oil has the properties I was looking for. I love this oil. It adds a buttery, nutty flavor to food and gives a good imitation of the kinds of fat that are bad for you. By using the pressure cooker and then refrying the beans, I made them taste almost exactly like Rosaritas. That’s not that easy to do.

You can travel from Northern New Mexico to Southern Mexico and frijoles refritos will have the same taste and texture. Even with the addition of different kinds of chilies region to region, frijoles will still have the same consistency.

Topped with cheese, onions, cilantro, and a lime wedge, eat them in a bowl with warm corn tortillas. Or wrap them up in burritos with calabacitas. They are traditionally served side by side with arroz (rice) and enchiladas. However you eat them, frijoles refritos bring the protein content, and when coupled with rice, make a complex protein. Anyone eating vegan can get plenty from eating this staple diet.

Follow this recipe and you will have happy diners coming back for seconds and thirds. 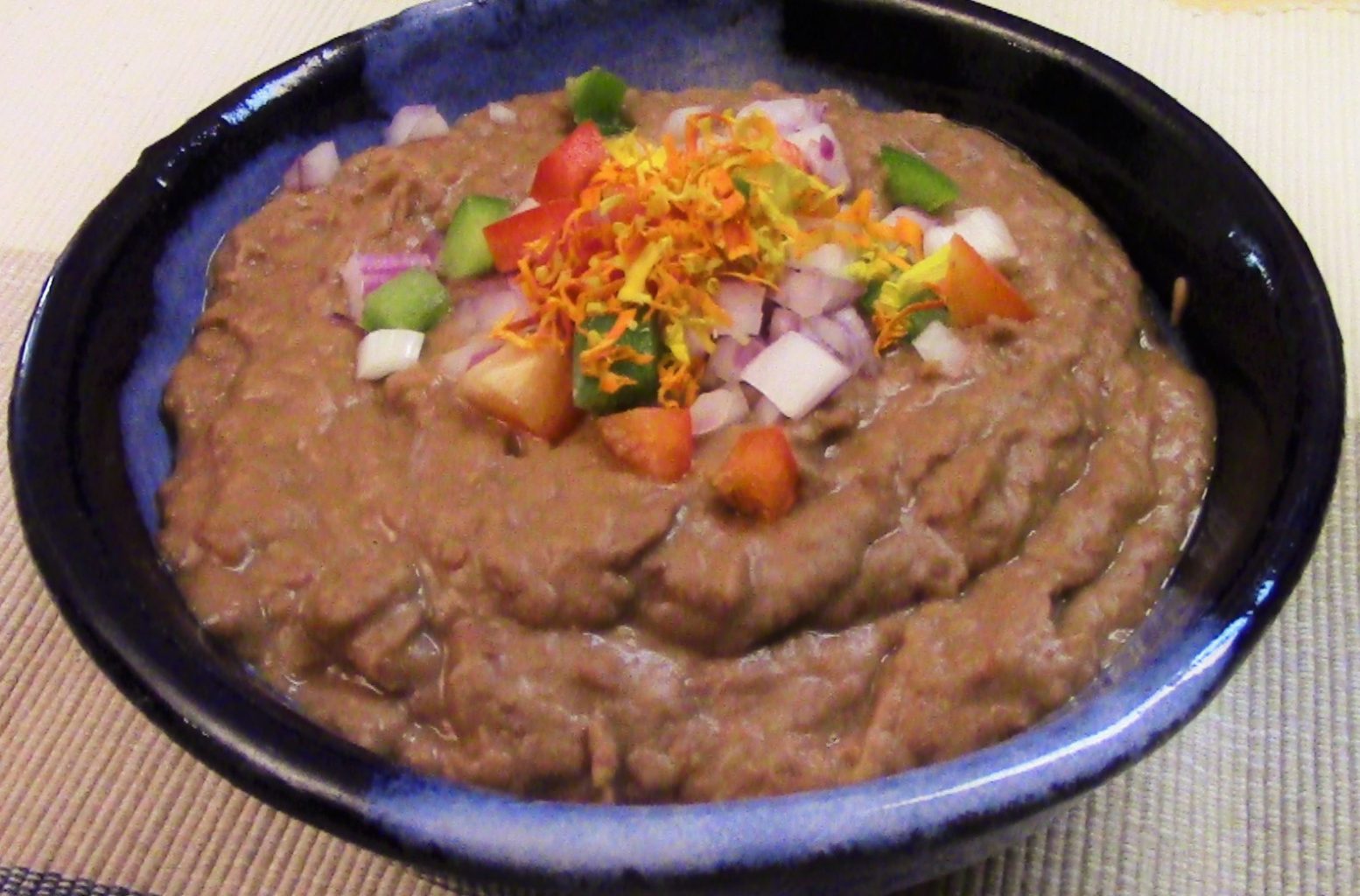 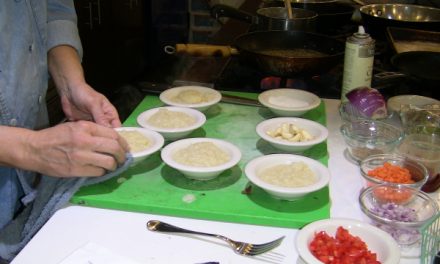 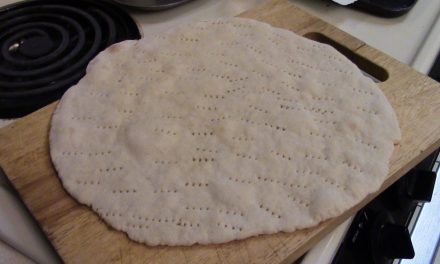